Last night, I went to the range with my lead-loving-family and broke the cherry on my new AR. Finally, after years of building guns that look and feel like AR’s, I’ve got one of my own and had it out to punch paper. All in all, it was an awesome night where I was able to test gear, guns and have a good time – at the end of the day, that’s why I go to the range.

For quite a while, I’ve been sitting on a new-to-me AR15. A NEA-15 that I purchased out of pure happenstance. I fell into a little bit of cash and, having just passed my RPAL, I wanted to put money down on an AR. I looked online at the NEA series of firearms but felt strange putting that much money on something I couldn’t even shoulder first. I didn’t end up purchasing one on the day I thought I would and was taken to the range by my dad as sort of a consolation prize, to shoot his new SIG.

There, I met a guy shooting an awesome little Glock. I noticed an AR in his case and naturally asked what it was made of. He told me that his AR was the exact model I was looking to purchase. I gushed.

After walking me through the mods he’d done to it, he kindly told me to load up a few mags, that I could have it on the range to shoot – like test driving a car before I pressed the magic buy button. This guy was a stand up, classy dude. The first thing I noticed about the gun was, on finding my eyes behind the Magpul MBUS flip-ups with a co-witnessed RDS, the gun jumped on a shot, but I was right back on target. Fast. I mean, really fast. Noticibly faster than either my dad’s or my brother’s AR. This was largely thanks to the front end, a special muzzle break that I’m still unfortunately unfamiliar with because, as much as I paid for the rifle, it – like my M&P9 – are registered in full to my dad and stored at his house until the license is properly processed.

So, I loved this gun. I asked the guy if it was for sale and we embarked into the classical ‘everything is for sale / name your price’ conversation. He probably didn’t know I had cash in reserve and, when he spitballed a price, I just jumped on it. We agreed that he could have a bit to think it over before we moved this quickly on a gun he came to shoot, not sell. Later that night, I got a text – we’re ready to get this show on the road.

So now, the AR that will eventually be mine rests at my dad’s place, waiting for registration after my paperwork is processed. I haven’t had the chance to really dissect it and when I had it out at the range – I was there to shoot, not to look. I’m excited to make it mine and doll it up a little. I already removed the micro RDS and put on my Bushnell TRS-25, again co-witnessed to the flip-ups. I couldn’t be happier. Despite the fact it doesn’t seem to like the Gen3 PMAG’s it came with, it feeds surplus through GI mags like a machine.

Next up, a full on field strip and learning more manipulation through some cold drilling, dry firing and more practice getting the mags out of my new HSGI pouches and into the gun. After that, we’re punching paper and hopefully looking for a carbine course next summer.

For now, I’ve taken my first sihouette target home to hang in the nerd-cave, a testament to many hours of pew pew to come!

so you can be operator as fuck? Drop me an email – they’re 8 bucks each, EMT, shipped! 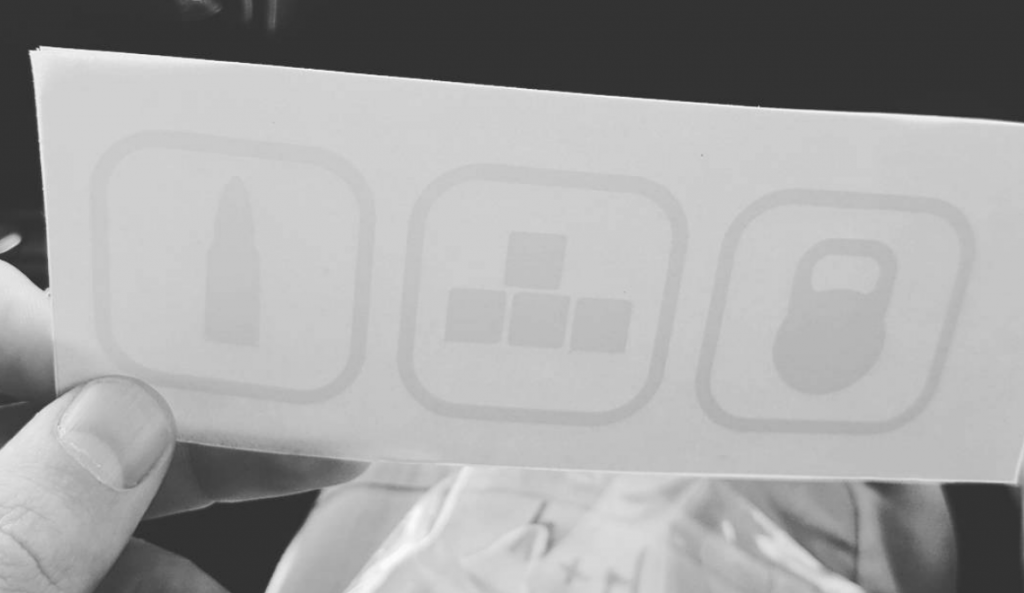 Bullets, WSAD and Kettlebells. Get shootin, get frags and get fit!