After participating in Heroes for CF this past weekend – I feel like I've earned some medal of merit or something. #heroesforcf is a marathon day of tabletop gaming in benefit of Cystic Fibrosis Canada. This year, we raised nearly 12K for charity in a13-hour day of RPG glory. I was the DM at table three, playing host to three separate three-hour sessions where each party would delve into a dungeon affected by the changes made from the group before them. A living, breathing, changing world – the exact way I enjoy DM'ing.

The day was split into three sessions and a simple challenge – the party who could collect the most gold from the three dungeons they visited would be declare the winners of the day, earning a prize. This generated a good deal of competitive, progressive energy as each group attempted to delve deeper than the previous.

Each session was placed after a good, half-hour break to allow the players to stretch their legs and to let the DM's of each table record changes, do admin stuff and get ready for the next game. Everybody seemed to run through the day without any major (at least, to my eyes and ears) issue. I heard from multiple people that it was a fun departure from 'normal' D&D – the underlying competition made for a fun 'speed run' through each dungeon, or, at least until the party was wiped.

With the details of H4CF set aside for a moment, I wanted to write up some thoughts on what the new Event DM – conference, convention or charity – could do to lessen the felt anxieties of running a game within such different circumstances that are presented by a table of randoms in a loudish gymnasium or conference hall. I'm going to cover a few things that translate well to any event based one-shot campaign.

Right then, let's get into it.

The day at Heroes for CF was blocked off ahead of time. We knew what we were getting into. From the Welcome to the Wrap, we knew the schedule of the day would require us to find sustinence for lunch but that a dinner would be provided alongside a handful of shorter breaks through the day.

The first and most ovbious thing to consider for a marathon of dungeon mastering is the selection of your food and drink to keep your spirits high during the day. Jeremy, the organizer behind H4CF would remind us on the night before the event via Facebook to retain a good energy for the players – it's us behind the screen that keep the momentum going for a fun-filled day.

For the event, I packed three Chocolate Chip Clif bars – a little high in sugar but otherwise calorie dense, packable, quick to eat and clean. I think those are good, general qualities to look for in foods you aim to bring to an RPG event where one or more meals are on your own order to provide. Keep in mind that during the down times, there's still work to be done – helping with the event or getting your table ready for the next run, your day will be slam packed from start to finish.

I also packed an apple, just to get a little something good in me. The night before I ate a great dinner and kept it clean for the rest of the night. The DM is not only arbiter but entertainer. A mindful moment for self-care is a must. Good food creates good output. 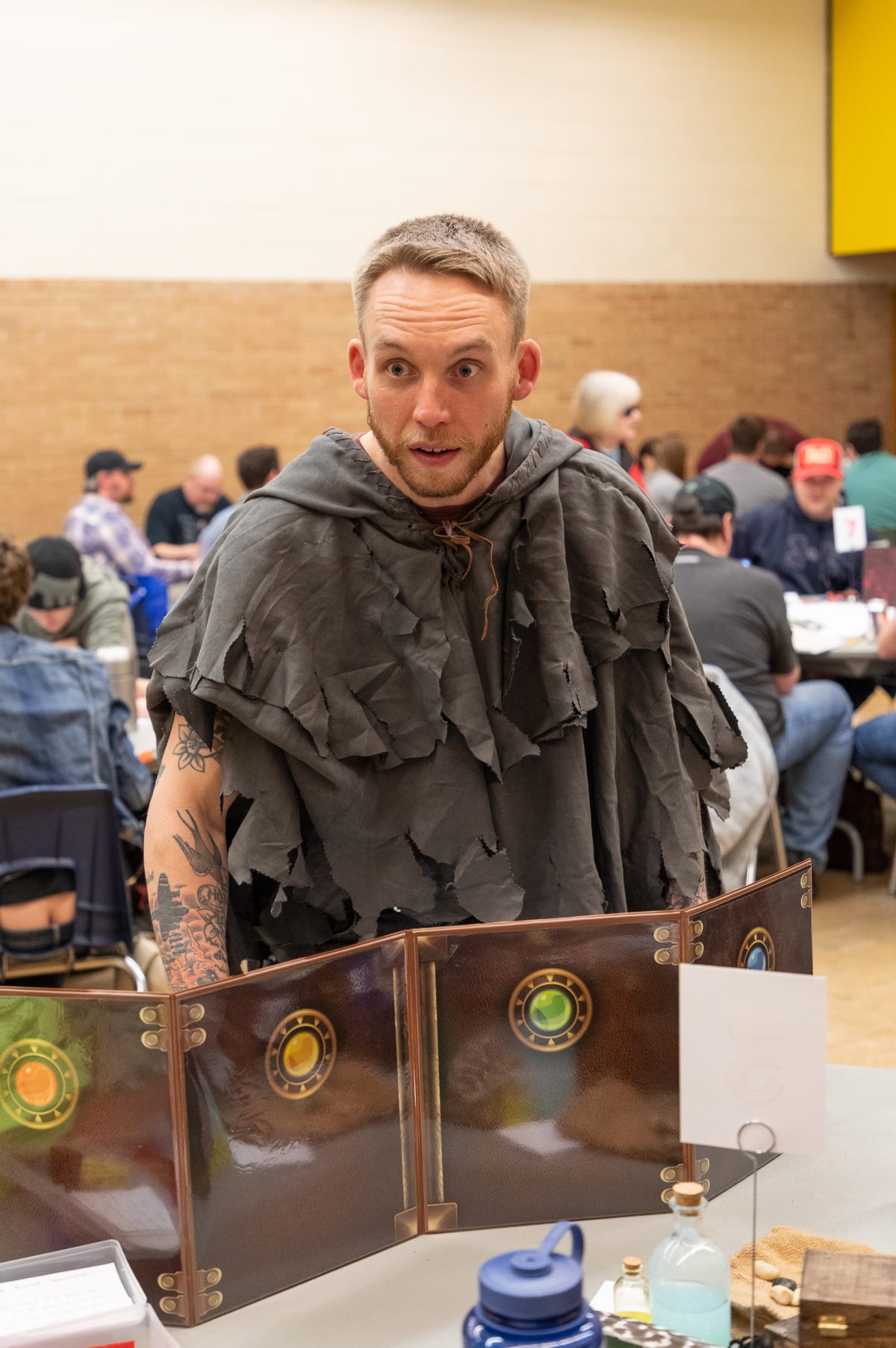 DM Bill – You want to try to -hug- the Flesh Golem?

Here's a few things that were perhaps the most low-key interesting aspects for me to see at H4CF – the tables, the maps, the screens and the style each DM had lent to their table management.

We had DMs with roll-out maps, some with modular terrain and one with a faux-fire lamp. Each table was evocative and personal. I think that's a really interesting aspect of this speed-dating style event – each party gets the opportunity to experiment with a handful of DMs and the styles they bring to the table.

After it was all said and done, I wrote down a few ideas to think on for next time.

First and foremost, I need to take a good hard look at the way I organized my adventure, the supplementary material and the event-provided handouts.

In my little tote, I brought the 30-something page printout for my dungeon, my PHB and MM hard covers, a leatherbound supplement I have a great selection of worldbuilding stuff built into, the dungeon's map, a big handful of curses and items written onto cards, my laptop, my DM screen and my dice tray. When I got on site, I was given a blue folder with another handful of sheets. All of this got smashed up into a pile of highschool-era non-organization within a few minutes of gameplay but by the end of the day I had a little system worked out – what goes where and what to keep on top the stack.

I started each game with a little social agreement – the rules I might not have the greatest grasp on are open to correction by the table and I'll respect that, but I also kindly ask for the respect of the table if 'the DM said so' rule is offered up by me. For that reason, I didn't need the laptop nearly as much as I thought. Because I had everything written down and printed out, I relied much heavier on my hard copy material to run the game. Next time, I'll digitize all of this and run it off my laptop in multiple tabs. If only for the cleaner workspace, it will simplify my area greatly to put it all on the screen and there is plenty of time to catch a quick charge if my battery starts to run low. Keeping the screen brightness down and all unneeded apps closed should help with that, too.

Next time, I'll write down all of my supplementary stuff in a Cahier notebook – maybe. I like the idea of handing out a cue-card, folded in half to the smitten player – there's a little 'rush' in getting a secret from the DM, even if it is a curse that makes you speak in a high-pitched voice for twenty minutes.

Outside my screen, I had a good handful of props. I had potions, a hawk fether on top a century-old hunting manual, antique boxes and a set of 'seeing stones'. With plenty of room for player stuff, I wanted to put a selection of 'oddities' that tied back to my dungeon for inspection and inspiration on the table.

Next time, I'm going to vastly increase the 'curb appeal' of my table. I'll have some kind of covering – maybe even seat covers, too. Though I had a cloak this time around, next time I'll be in full garb. I'll bring a great selection of terrain and miniatures next time, too. It not only adds some eye candy to the table but also allows for tactical combat, if required. The players who are coming to an event like H4CF are looking for something different – I'll make sure they have a full on sensory experience next time around.

The lead up to H4CF was a creative enterprise with specific limits on the dungeon we were set to design for the players at our tables. They had to have a number of features; a big boss that had party-wipe capability, 10,000GP total of coin, art and gemstone, a cross section of RP, puzzle and combat and finally, a duck.

So, when I set out to build my dungeon I had a few ideas in mind. I wanted to build something dramatic, to play well to my DMing style. I'm an on-my-feet, speaking in bad accents, waving my arms for magical effect type DM.

I planned a dungeon with about 20 rooms. Each room had separate encounter or 'something to do'. Strewn through the rocky rooms of Raltun's Alchemy Reserve were beautiful gemstones and jewllery but none was just an easy investigation check away. Players had to work for everything.

One thing I can really commend the tight little group of DMs for in planning my dungeon is having them there as a fall-back for ideas and direction. If you're part of an event with multiple tables, try to organize the DMs into a cohesive group and rely on one another for inspiration and a 'home base' for your creative energies.

Some things I would adjust for the next event build are easily remembered. First, I would ensure all the interactions and encounters can be played 'big'. The event is a commotion, to say the very least. I had a plan for a few slower, quiet encounters that I just threw out for louder, more expressive characters. I found the reaction and interaction between those 'big' NPC's and the players at the table to be much more fun. Sure, there's a place at my home table for the whispered, tension-building conversation, but H4CF was the place – at least for me – to play it 'big'.

Piggybacking on that idea, my style lends well to the dramatic. I like bringing close-up magic to the table, over-acted accents and expressive body movements. The next dungeon I build for an event like this will allow me to let those aspects of the game really flourish. For H4CF – again, for me – bigger is better.

H4CF – not your vanilla D&D game

Heroes for CF played very well this year. We had the 'Cry Havoc' board, where a player who had raised the requisite funds to unlock this ability would roll a vicious D20 on a table of really ugly stuff targeting another table. We had a neat quest board for parties to pick their next dungeon from. We had a mildly competitive spirit in the room. We had power-up cards that let players raise funds for Cystic Fibrosis Canada for the ability to get a sweet auto-nat-20 or even to become the DM for 10 seconds. We had ducks.

Players had the opportunity to win from a excellent collection of prizes that ranged from fantasy artwork to boxed games and RPG supplements.

I would reccommend H4CF as an event for any tabletop gaming fan in Ontario or beyond. Truely, this event is worth travelling to. It's unique, fun and for an incredibly worthwhile cause. I'm looking forward to 2020 and all the fun to be had at Heroes for CF.