Last year, I participated in the GoRuck Tough Challenge. If you want to read my after-action, check this out.

See, I've got this basic hypothesis. I believe men are losing a cultural foothold on who we are through a lack of rites of passage, dissassociation from the tribe and no 'great struggle' to fight against. I've been doing quite a bit of thinking on these issues recently and am planning a run at a book on the above topics. 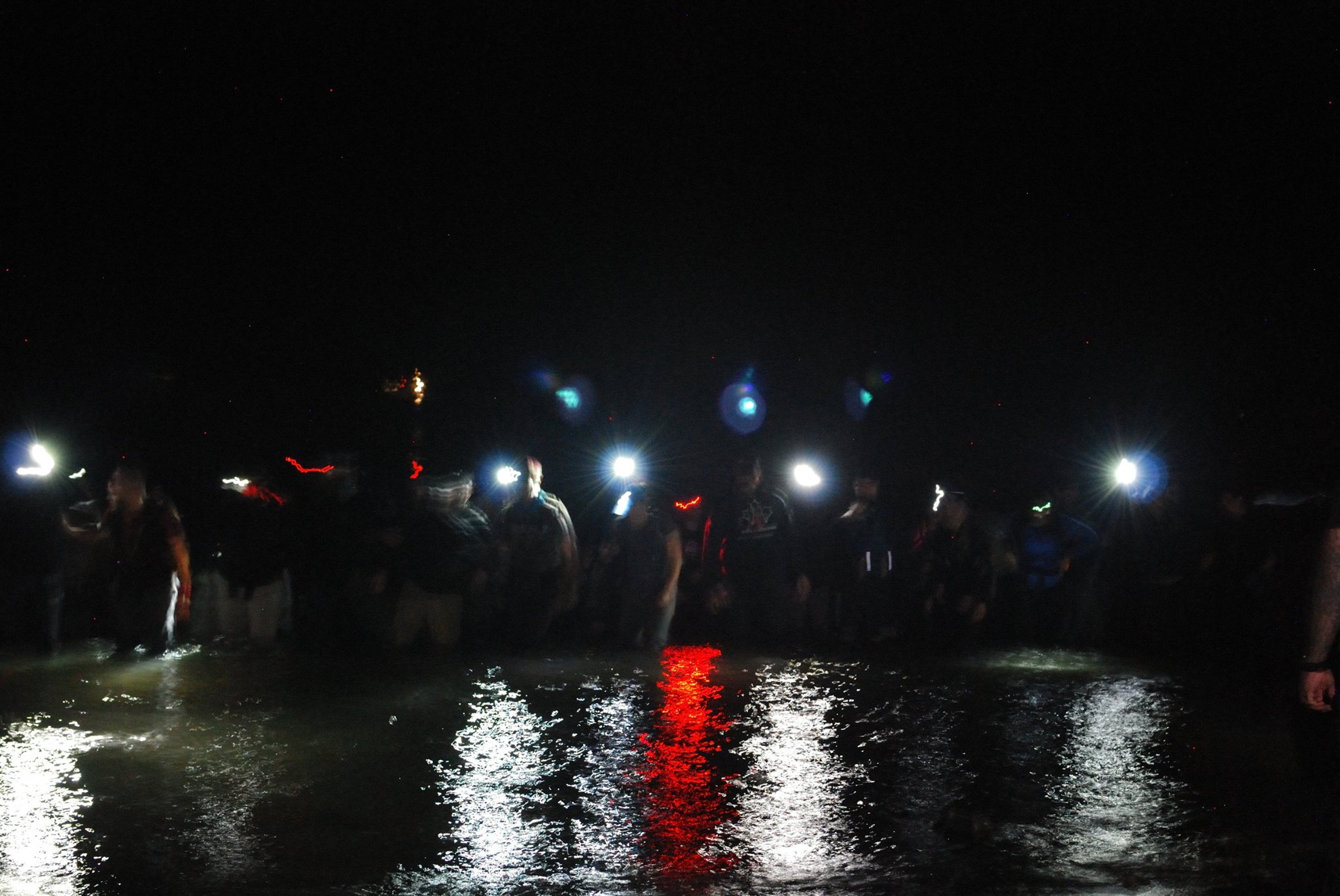 Our class, waist deep in the lake, ready for our first plunge into the cold.

To understand a part of myself that had been truely tested, I've put some time into thinking about some of the physical struggles I have introduced into my life. After all, if you can buy an avocado at any time of year, anywhere in the world, we're not living under the same restrictive systems that got us here. That's both a gift and a curse – it provides convenience but removes a degree of built-in hardship.

At GoRuck, I was tested. I managed to 'get my patch' through mental toughness and a will to fight. At the very end of the event, something unique happened. I emailed GoRuck about it.

Basically, I wanted to ask Cadre Jake about a few things – I'm preparing a
book proposal about men, masculinity and rites of passage.

When we had completed the Tough challenge, Cadre Jake went down the line
handing out patches followed by a closed fist to the chest.

In some ways, I've since decompressed that experience in my life as a
genuine rite of passage. That moment – the fist to the chest, is that
something he developed or is it something that was passed down to him in
military service?

Much to my surprise, I had recieved a very detailed response from Cadre Jake a few days later. As soon as my phone reported his name on the screen, I rushed to see what his reply might hold.

Thank you for your question. The ceremony of finishing an ‘act’ (a military exercise that is considered extremely difficult and is engraved in the historical curriculum of a units training) is considered a mile stone in a journey. When it is all said and done you have earned you right of passage to this point. Now you are ready to enter the next stage. This is emphasized either by receiving a pin, beret or some item of memorabilia from a commander or someone that has done it before you.

This 'act' we had finished, I would say, is among the more difficult that any civilian could sign up for. Save for the extreme racing events – 100k trail runs and the like – GoRuck is very difficult. Where thousands sign up for Tough Mudder, our class had 29 people ready to take on the burden of, literally, carrying the heavy load as Jordan Peterson would have us do.

Historically the fist to the chest was used to push a units pin slightly into the muscular portion of soldiers chest. It stings a little, but at that moment your on such a high you don’t really feel it. This has since been reduced to a firm fist to the chest and handing of the pin to the soldier, however the meaning remains the same.
‘Acts’ are obvious stages in military training and just like finishing a tough or a heavy or light it is just 1 event, preparing you for future events. The mental endurance required to finish an event or an ‘act’ is more then the average day to day life experience and this is why they are done. What do I mean by that? The idea of a ‘false finish’ was used almost weekly in my training. One would finish a week of navigations walking 25-30km every night get on the bus with his team mates and pass out. Everyone would assume they were rolling back to the base to do an equipment check and prepare for the weekend, only 20-30 minutes later would the bus stop at the bottom of the largest mountain in the Jordan valley and the commanders would blaze the horn through the bus: “2 minutes everyone off the bus, stretchers open, 2 casualties and face “The Sartaba”. Squinting into the unbearable heat of the morning sun, the silhouette of the mountain slowly becomes apparent and your crusty body begins to move with words of urgency and encouragement from the commanders.

Here's an unpopular opinion that I've held silently since finishing the GoRuck challenge; I'm done rucking for events. Since rucking is outside the normal workout regimen I've set for myself, I'm using it right now as a supplement to my regular routine. Where I'm routinely lifting weights, running and practicing combatives, I look at rucking like wearing a weight vest on a run – it hits different parts of my body and provides a different 'wall' to overcome, but I'm not sure I'll do a tough again.

I only say I'm not sure because I've done it. That might change – every once in a while, I want to see if I'm capable of finishing a Heavy challenge. That said, I feel like completing the Tough somehow shifted my experience as a man. Like I had become a part of some small group – like the feeling of being a part of my BJJ team – who have done something beyond the ordinary.

I distinctly remember receiving my patch – I remember Cadre Jack punching my chest and 'coming online' as my brain sparked back to life. It meant something to complete that and further, to have such a strong, unmistakable signal to accompany that completion.

In every day life, we don't have these signals. We're lost in a wash of work, multimedia and social rules but when faced with significant moments like buying a house, getting married or having a baby, many secular families don't have specific rites of passage through which to fully express the meaningful events that have taken place. Sure, there are bachelor parties, baby showers or housewarming parties but in many cases, I feel like those events have become little more than hypercommercialized gift parades.

Something deep inside told me that the action of punching my chest had come from some lost tradition. Buried behind political correctness and the softening of our heritage, a long line of men before me had endured hardships through labour, long winters and least of all, war. Not at all to compare GoRuck to combat, obviously, but somehow, I felt like I had some fractal peice of that history through that tiny moment. When I received my congradulatory punch, I was brought into some fold of hard working men by a hard working man.

Pacing up the mountain sliding and slipping as the incline gets steeper and steeper, you feel as you would in a heavy or a tough. As hard as it is one gets through it. This is where you see who is part of the team and who is not.
The constant use of these types of ‘acts’ and not knowing what lies ahead – ’the fog of war’ or ‘fog of training’ as we called it builds mental toughness and the ability to keep pushing forward even when the gas tank is empty.
You take these experiences into real life and use them in business, relationships and wherever else is necessary.
I hope this explanation answers your question.
Regards,
Jake.

GoRuck has been something I absolutely have taken with me. I can remember being in a particularly rough situation and remembering the arduous 'sugar cookies' we had to complete on the sandy beach. I remember thinking 'it's not that bad' as I quietly compared my situation to that brutal exercise. If you ever come upon this post or the project that spins out of this idea, however that manifests itself, know that you absolutely did answer my question, Cadre Jake. Further than that, you afforded me an experience that is vacant from modern life, an initiation into 'something more' by a mentor with credibility and grit.