Every so often, in-between the nonsense that positively fills the bandwidth on YouTube, you find a gem. Adventure Archives is a diamond, if “outdoors” videos are the bucket of rocks.

Produced by a group of friends in the states, the show is exactly that, it’s a show. Reminiscent of Les Stroud’s work in the sense that all of the video work is done by them directly, it must take FOREVER to complete an episode without the help of major networks. They’ve got the little bits, Steadicam and awesome lenses that technically set them far apart from the leagues of ‘hey, look at my tent’ videos, shot with a potato, but there’s more to it than that.

Adventure Archives is a show that follows friends on the trail, hiking and camping. They make sure to tell the story of their camping excursion as though they’re telling you why they did it, not how or when. Over some of the shots they take of the surrounding natural world, there is narration added that I would call ‘philosophical’ thoughts on nature, the environment, being human and just being alive. It’s difficult to explain without quoting them directly, so I’ll do my best to snatch one from the latest episode – Yellowstone – to show you what I mean;

“I was canoeing out on the lake with a friend, I don’t know, that’s like the greatest sense of freedom, because, you’re so used to just being holed up inside at dusk and to be outside, let alone gliding on the water… that’s living.” Andrew Lin, Adventure Archives, 2016. 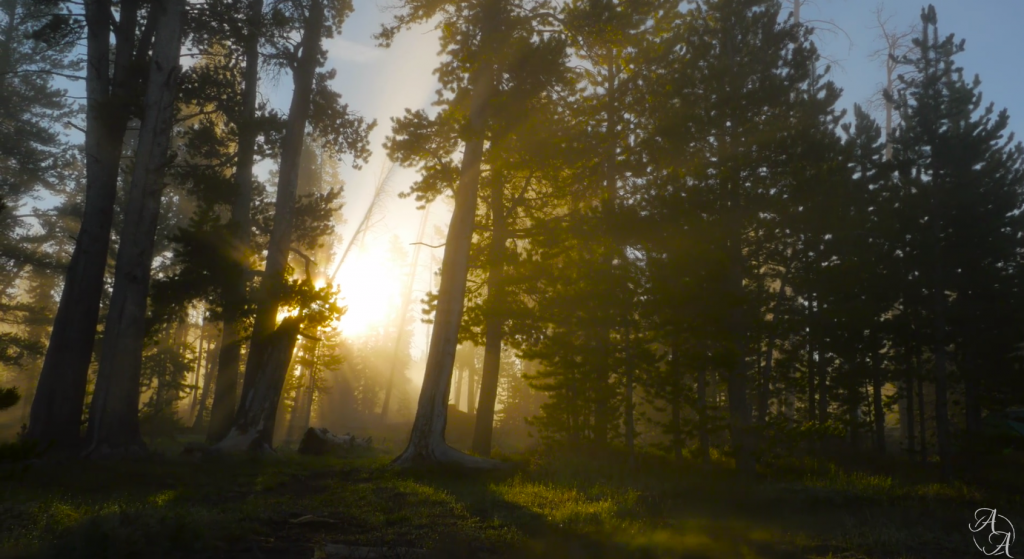 A screen cap taken from Yellowstone, the latest episode from Adventure Archives.

The show takes me back to a place in my life where I experienced a different sort of freedom. That’s a broad statement, so let me explain.

Now, I’m an adult. Realistically, I have the most freedom I’ve ever had. If I really wanted to make a crazy decision like, I don’t know – pack my bags and move to Europe or something, I totally could. It would be very difficult for sure, but it is within the realm of possibility. Now, responsibilities anchor me to the decisions I’ve made. Don’t read that with any tone, it’s the reality of life. I made decisions, now I live with them and my life is different – a reflection of those decisions.

When I was a kid, I spent a lot of time on the Grand River. We explored, built forts and fished the river every day. Without exaggeration, every single day was spent in the woods that flanked the river. I can remember stumbling into a patch of woods that had a neat looking tree or a giveaway spot to build a fort. I remember the sense of adventure.

The show seems to describe that sense of adventure. The shots they pick to show us – interesting natural structures and the wonderful imagery of a sunrise behind the deep woods, I seem to understand it more than any other YouTube channel on the subject. The art behind their show resonates with me on a deeply personal level. I see the lot of them crusading through the wilds, not looking for anything in particular but similarly trying to find something very particular.

I’d encourage you, the reader of this tiny blog in an unknown corner of the internet, to check out their own corner of the net. The technical aspects of the show are absolutely stunning. The camerawork, editing and completely self-produced soundtrack are worth the watch, but it’s the personal element, that narration that cuts deep and digs into your memory that will keep me coming back every episode, as long as they’re made.