Second kind of cool: a trap I know too well.

At least I know it, right?

I mean, at least I’m present enough, self actualized enough or real enough with myself. Whatever you want to call it, I know my pulls. I’m pulled to black and tan, pressure switches and purpose built gear.

A while back (a good while, now that I think about it) I happened upon a super popular youtuber who introduced me to a few now-popular terms in the action-shooting community. Try as I might to incorporate them into my day to day, I still fall victim to the little mental demon of ‘second kind of cool’.

Second kind of cool, SKC from here on in, basically translates to me as this; it’s anything you find cool for the sake of it just being cool to you. It doesn’t have to be functional at all, so long as you think it’s undeniably badass. I’m not a big fan of crotch-rockets, but some guys swoon over Ducati’s. I’m not into revolvers so much but some guys scratch the cowboy itch with an old fashioned six-shooter. I get into the SKC stuff with backpacks, computer modding and building out AR15’s.

Traditionally, I just built airsoft AR’s or even better, just in my head – what I would have, if I had one. I recently got my RPAL up here in the north and with it, a new-to-me NEA 15, 12″. Can’t wait to get it, can’t wait to start swapping parts. I’ve spent the last few days weighing out a decision to sell my TRS25, a red dot sight waiting on the shelf of my gun cabinet, for some sort of illuminated 1-6x scope, like I see in all the cool pictures. I don’t know if it would add any value to the gun itself or make it more of what I want it to be, I just think they’re cool.

Of course, that won’t be the determining factor, but it’s got to be a part of the puzzle. The rifle pictured below represents the type of boomstick I would expect to see in the game pictured above. A fully kitted out AR, gripped by some seasoned operator in Call of Duty. Doesn’t make it a great gun unless you know how to run it, but damn, if it doesn’t look STELLAR all dressed up, right? 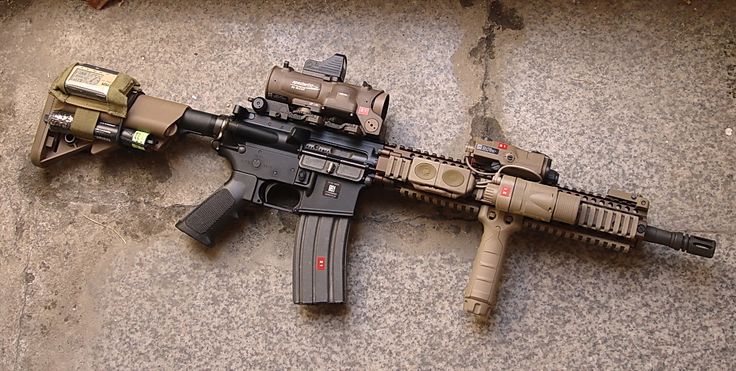 It’s important to ground myself in reality on the eve of getting an AR. To understand that the rifles I see in so much of the media I consume, be it games, /r/ar15 or gun mags, I’ve got to build a rifle for me. I’ve got to make the tool fit the purpose. It brings to mind another valuable phrase I’d picked up a few years ago from nutn’. POU or Philosophy of Use is a methodology to determine how exactly you’re planning on using the firearm (or any kit, frankly) you’re planning on building out. In understanding what you’re actually looking to accomplish, you can build to fit the purpose. That way, you’re not wasting space, weight, time or money on stuff you don’t need – unless it fits into SKC.

A weird crossroads to find yourself at, to be building a rifle out to accomplish some sort of pre-designed POU when at the same time, adding stuff to satisfy your very own monkey-brain thinking, constantly drawn in my case to blinky lights and tan-coloured plastic.

I’ll be sure to post updates when I actually get the rifle and when I’ve got some better idea of what I’ll be doing with it. Until then, build to spec and add coolness as you see fit.